The people I am writing about will never read this column. But anyone who does might consider the irony of kidnap and ransom camouflaged as law enforcement at home while civil-society stars rant about bringing back lakhs of crores of black money salted away in tax havens and whip themselves up into a frenzy over placing the prime minister under the Lok Pal’s discipline. It’s said the darkness is greatest under the lamp.

It was around 3.40 in the afternoon on a gusty Friday and South-Eastern Railway’s Dhauli Express between Puri and Howrah was about to leave Bhadrak station in Orissa. An athletic young man who had got to Bhadrak from his village and paid Rs 82 for a ticket to Howrah ran up and down the train looking for a place to squeeze in. But the general compartments were tightly packed with the doors firmly locked from inside. Our young man hammered on doors and shouted through windows but to no avail.But around 35 passengers were huddled on the floor of the vendors’ van meant for luggage. There was no luggage and no guard and the doors were wide open to wind and rain. The train was about to leave Bhadrak, and the young man’s job as a condominium durwan in Calcutta would have been in danger if he didn’t get there that night. Moreover, the vendors’ van crowd was welcoming, and with no other choice, he jumped in as the train began to move.
He jumped out again at Kharagpur in West Bengal at about 7.00 p m but the rain was lashing down hard and all the compartments were still locked. No one would let him in. So it was back to the vendors’ until they reached Santragachi, 7 kilometres from Howrah, an hour later. That’s where the drama began. Four or five men boarded the vendors’ van, announced they were plainclothes policemen, pushed the passengers out and handed them to Railway Protection Force (RPF) personnel who made them squat in an outside lock-up. Our man from Bhadrak tried to explain but they shut him up.

The RPF returned nearly three hours later to ask how much money each had. Some produced Rs 500, some a thousand: the money was seized and they were let off. The man from Bhadrak had only Rs 400, which they also took but it wasn’t enough to buy his release; he and 13 others were ordered back into the lock-up where they were given chapatis and sabzi to eat and told they would be dealt with in the morning. It was quite late next day, around 11.30 a m, when they were taken in a local train to Howrah and locked up in a cell.
A magistrate in a black jacket, white shirt and tie appeared later in the day and fined each prisoner Rs 300. Having already paid Rs 400, the Bhadrak man asked for the balance but the court mohori retorted that, on the contrary, he would have to pay another Rs 250 to be released. “There are so many of us, and we’ve been working all night for you!” was the explanation.

A personal disclosure is called for: my flat is in the condominium where the durwan works. I know him to be of impeccable integrity. He called me several times from Santragachi and Howrah, but when I wanted to have a word with one of the RPF officers, I heard the refusal. They would confiscate the phone, they warned, if he didn’t shut up. Since our durwan had no more money and they wouldn’t release him unless he paid up, I sent my car and driver to Howrah with money. The receipt they brought back – High Court Form No. (A) 23 (Civil) / (A) 18 (Criminal) – was for Rs 300. He had paid Rs 650.

Such things happen all the time all over India. The difference between our police and Somali pirates can sometimes be a matter of scale. If Mamata Banerjee were suddenly to visit a railway station or hop on an unfashionable train, just as she drops in unannounced on hospitals and offices, she might see for herself the extent of lawlessness dressed up as law in her own backyard. Baburao Hazare, Ramdev and all their pious social activist friends should accompany her.

Incidentally, HAPPY JOURNEY is printed on both the Howrah-Bhadrak and Bhadrak-Howrah railway tickets. I hope it is so this time for my durwan for he is back in his Bhadrak village this weekend getting married.

An Ode To My Mom On Her Birthday 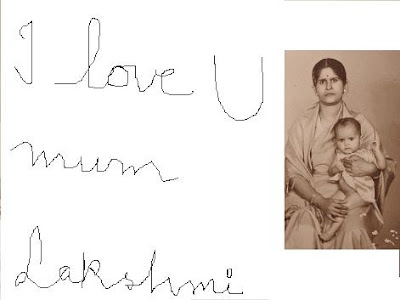 My Mom is loving ever caring
Really understanding too
There with love when things go either
Really good or bad for me
Mum is there with love and guidance
During every trying time
Mum would always clap the loudest
When I got the smallest of successes
Even when I was quite little
Mum made me feel ten feet tall
So I honour Mom and thank her
Each year on this day  in June
Hope we have you around for many more years , Mom
Posted by Lakshmi Ramachandran at Sunday, June 05, 2011 1 comment:

Dunno if anyone has faced a similar situation. Getting small  domestic repairs done has always been a pain  and the pain somehow seems to be increasing by the day. This sector is the most unorganised.Of course in India most sectors are unorganised which leads to this constant tussle in the mind , was I duped? Could I have bargained for less?

In the area where I reside , there are about four electricians. I have patronised one. My neighbour said he is a cheat . So I tried my neighbour's electrician but there seemed to be a nexus between them and I was still with the tussle. Hubby dear said better the known devil. So it was back to the first electrician.

The moment I need to call him , I go on my back foot and quiz him a lot about the bill he submits , but have to pay the amount finally, feeling defeated. The feeling is worse than the emotions which arise when I make a loss on my stock market trades. Losses which run into thousands sometimes compared to the few rupees the electrician may be duping me of. But then my trade losses are ones I am willing to take .Losses which have occured knowingly and not one out of cheating. The feeling of betrayal is horrible and I am forced to trust him!! Am  I making a mountain out of a molehill?

Today I found the solution ! I follow  "Ancient Proverbs" on twitter  and this common sense Chinese Proverb did it.


If you suspect a man, don't employ him, & if you employ him, don't suspect him. -Chinese Proverb
So that does it, I won't  torture myself anymore over the electrician.